As 'Parts Unknown' Wraps Up, Fans and Brands Say Farewell to Anthony Bourdain

Viewers bid farewell to a travel and food icon on Sunday, as the last episode of Anthony Bourdain: Parts Unknown aired on CNN. On June 8, 2018 the chef and explorer was found dead of apparent suicide in his hotel room while filming for the series in France, and in August, CNN announced a special final season with Bourdain’s last filmed segments as well as a tribute to the chef and a retrospective on the show’s production. Using data from iSpot, Canvs and Inscape, we took a look at fan reaction to the season, as well as viewing trends and data about the advertisers backing the series.

And finally, according to Inscape, the TV data company with glass-level insights from a panel of more than 9 million smart TVs and devices, over half (51%) of people who watched season 11 of Parts Unknown went on to watch at least some of season 12, but only 34% of viewers who tuned in to season 12 had also watched season 11, meaning 66% of the season 12 viewers were new to the show. 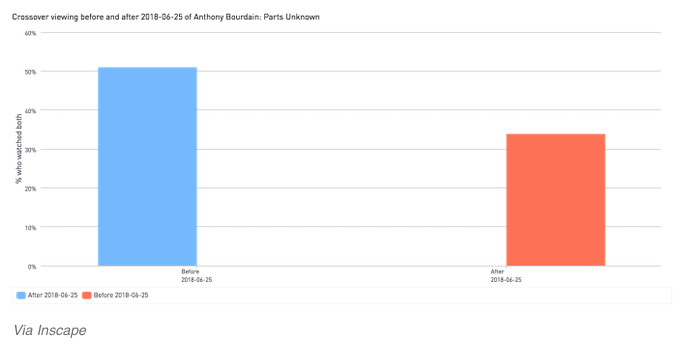