How Many Cable News Viewers Actually Take a Balanced Approach to Viewership?

In this time of political polarization across our country, we were curious to see how many cable news viewers take a, well, truly “fair and balanced” approach to TV news consumption by watching more than one of the major networks. We partnered with Inscape, the TV data company with glass-level insights from a panel of more than 9 million smart TVs and devices, to look at viewership trends across the three dominant national cable news channels: CNN, Fox News and MSNBC. And although it’s not exactly a cable news channel, we also took a separate crossover look at these channels plus C-SPAN, given its role as the source of a lot of government news and proceedings. The data below covers the last 30 days.

First, a note about methodology: You have to do more than just flip past a station with your remote to count as a “crossover viewer” in Inscape’s system. For the data below, the minimum threshold was set to two minutes. Some key insights:

---- CNN viewers are mostly likely to at least briefly tune into both of the other networks, with 35% of them watching both Fox News and MSNBC.

---- The highest crossover was between MSNBC viewers and CNN (59%). And 37% of MSNBC watchers also checked out Fox News.

We also looked at crossover with the threshold set to 10 minutes, and the numbers shifted a little bit:

---- 31% of CNN watchers checked out MSNBC, while only a quarter also watched Fox News for at least 10 minutes.

When examining crossover with a two minute threshold including C-SPAN, almost the same percentage of C-SPAN viewers also checked out CNN (57%) and Fox News (56%), which may signal that C-SPAN devotees indeed have a more balanced approach to news consumption.

We also looked at crossover between popular primetime shows on each of these channels: Hannity on Fox News, Anderson Cooper 360 on CNN and The Rachel Maddow Show on MSNBC. With the two-minute threshold, the biggest crossover was between Maddow and Cooper, with 42% of Maddow’s viewers tuning in to see Anderson’s show as well. Only 7.8% of Hannity viewers also checked out Maddow, while 14% of them have tuned into Cooper. 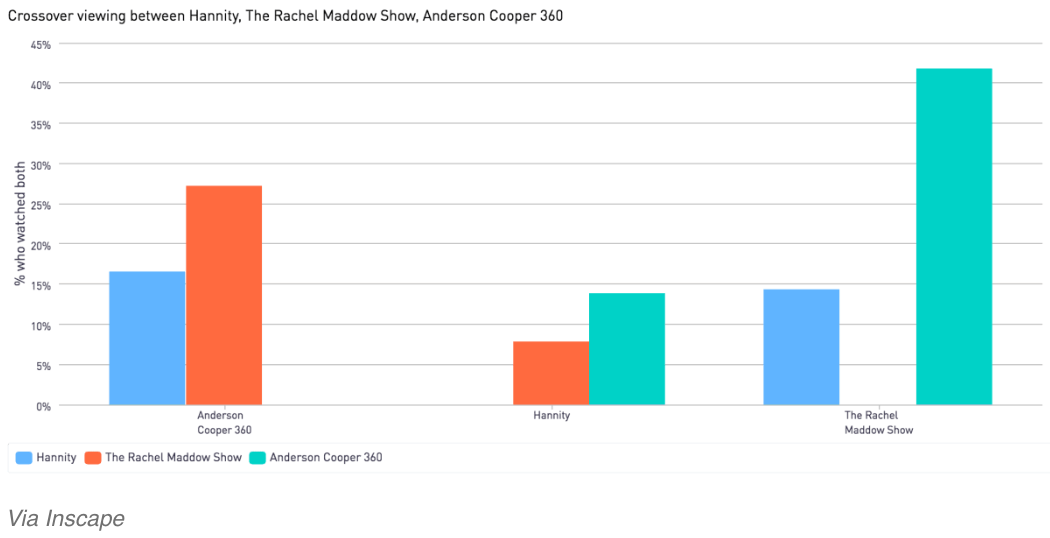 The numbers in general shrink even further when it comes to a 10 minute threshold: 3% of Hannity fans watched 10 or more minutes of Maddow, while 6.7% watched Cooper. 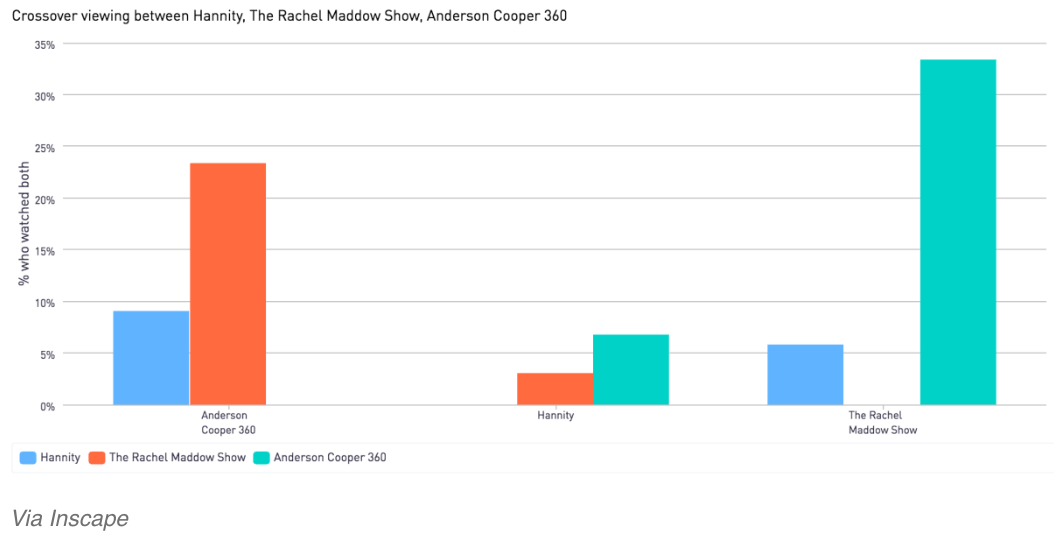 When it comes to viewer location, there are hotbeds of CNN viewership on both the East and West Coasts, while there’s particularly significant tune-in for Fox News in the Florida panhandle. As for MSNBC, the Palm Springs, Calif. DMA sticks out in particular. (On the heatmaps below, the darker the color in the graphic, the more households were tuning in.)