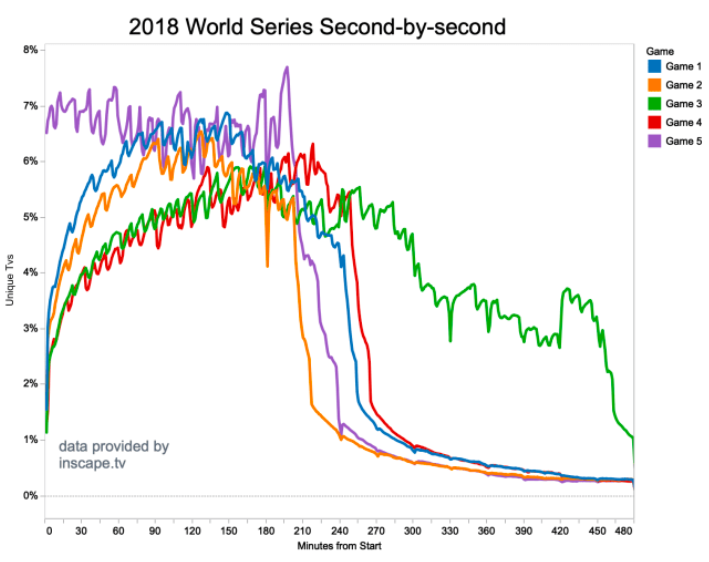 With a bicoastal matchup between Boston and Los Angeles, no start time — especially on weekdays — was going to work for everyone. Based on the graphic above provided by Inscape, the TV data company with glass-level insights from a panel of more than 9 million smart TVs and devices, tune-in mostly started low and then rose over the course of the game. Part of this is likely due to the 5 p.m. PT start, which made it tougher for West Coast fans to catch the early innings before getting home from work.

There were exceptions to some of the prevailing trends, though. For the Red Sox’s series-clinching game five win, fans showed up right from the start and viewership rose over the course of the game, hitting a peak near the conclusion.

Game three’s 18-inning marathon also provided some unique insights: similar to other games, viewer numbers rose gradually for three hours, but then jumped back up numerous times as both teams looked poised to break open the longest game in World Series history. You see spikes in the 13th inning when both teams tacked on another run to make it 2-2. Then as the game proceeded into the early morning hours for East Coast fans, viewership declined precipitously. The last late spike comes from Max Muncy’s game-winning home run in the bottom of the 18th. Proof that social media and word-of-mouth can have a great effect on tune-in (even after 2 a.m.).

The game three numbers also tell us something about audiences — or at least this series’ baseball fans — and how long they can sit through even a game with championship implications. Time zones have an effect too. But starting around the three-hour mark, the audience for game three was lower than it was at nearly any other point in the series. And it stayed even lower from the five-hour mark on.